When i first dived into video production I often would find my self shooting a project and out of nowhere my camera would stop recording not really knowing why i took to the internet to find out why this was constantly happening after reading alot of forums it really just came down to know bitrates for the footage i was recording and making sure i had the right type of cards to be capable of producing the quality of footage i wanted to shoot. The more i shot the more i learned about  how video bitrates and memory card write speeds functioned and if you dont understand this it can lead to some major confusion. So if you have ever had this issue im going explain why it happens and how you can stop it.

So with how advanced the camera market is today you really have to know your codecs and bit rates. Video captured by cameras is recorded internally to media cards using a variety of codecs. A codec compresses digital information to preserve storage space and makes it easier to play back quickly. Codecs can range from highly compressed with low bit rates (or data rates), such as AVCHD, to more robust, less lossy codecs, such as Panasonic’s AVC-Intra and Sony’s XAVC. The higher the bit rate, the more information is being recorded and, generally speaking, the higher the image quality. With higher bit rates also come larger file sizes and the need for more computer resources to play back and edit the video.

There are two main categories of video compression to consider: interframe and intraframe. Interframe, sometimes referred to as long GOP (group of pictures) contains a set of grouped frames, or “key frames,” which reference each other to produce an image, resulting in smaller file sizes. With intraframe compression, each frame stands alone and contains all of its own information. While intraframe files are larger, they also require less processing power to play back and edit, as the computer doesn’t need to look at a group of pictures all at once to display a single frame. Intraframe codecs tend to be used for higher bit-rate recording and are generally preferred for video origination, if available. Popular intermediate/editing codecs like Apple ProRes, Avid DNxHD, and Cineform are all intraframe.

The bitrate is the amount of data being written to the card each second when shooting video. As such, higher bitrates need a card that can maintain a high enough write speed to avoid any dropouts.

This is where the U3 write speed requirement comes into play– with a guaranteed write speed of at least 30MB/s, a U3-certified memory card. For example, should handle any of the a7S II’s recording modes with ease.

The a7S II shoots at different bitrates depending on the resolution, codec, and frame rate you have selected:

Video bitrates are described in Mbps— megabits per second– while memory card write speeds are measured in MB/s— megabytes per second.

Megabits (Mb), megabytes (MB)– what kind of difference can a bit make? A big one. 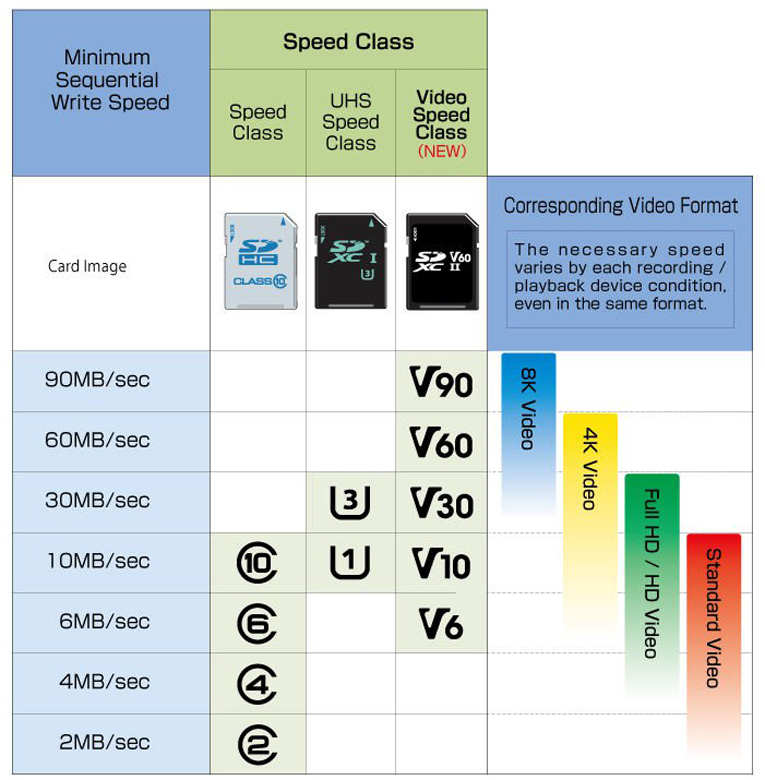 Here are a few different bitrates from various cameras: So be careful not to confuse Mb (megabits) and MB (megabytes). They are quite different and could cause you to spend way more on memory cards than you need to if you mix them up. Check your camera’s manual (or find specs online) to find out what bitrate your camera shoots at. Bitrates are defined by megabits per second (Mbps). In general, the higher the bitrate, the better the quality. The bitrate is the amount of data being written to the card each second when shooting video. Cross-check this value against the minimum speed rating of the card you are considering.